Of all the things my father tried to introduce me to, only one thing has ever stuck. There was no David Bowie or Lou Reed LP, and there was no Scotland, Spain or trip to northern France that could seduce me. Neither was there a sip of cognac or shooting escapade where I could sit back and enjoy myself. All of those things bored me to tears as a kid. But there was something that loomed in the background I could never really ignore. No matter how hard I fought back I knew it was only a matter of time before I was bitten by “the bug” as he calls it.

By motorcycles, I mean.

So a couple of weeks ago I walked into a showroom and picked up my first brand new bike: a Triumph Street Triple R. It’s actually the second bike I’ve ever owned but yikes is this an improvement over the first. Not only that but it’s one of the most beautiful and elegant machines I’ve ever been in contact with. Actually it reminds me of the time I picked up an iPod Nano and I was just completely swept up by every little detail of it. Everything just works. 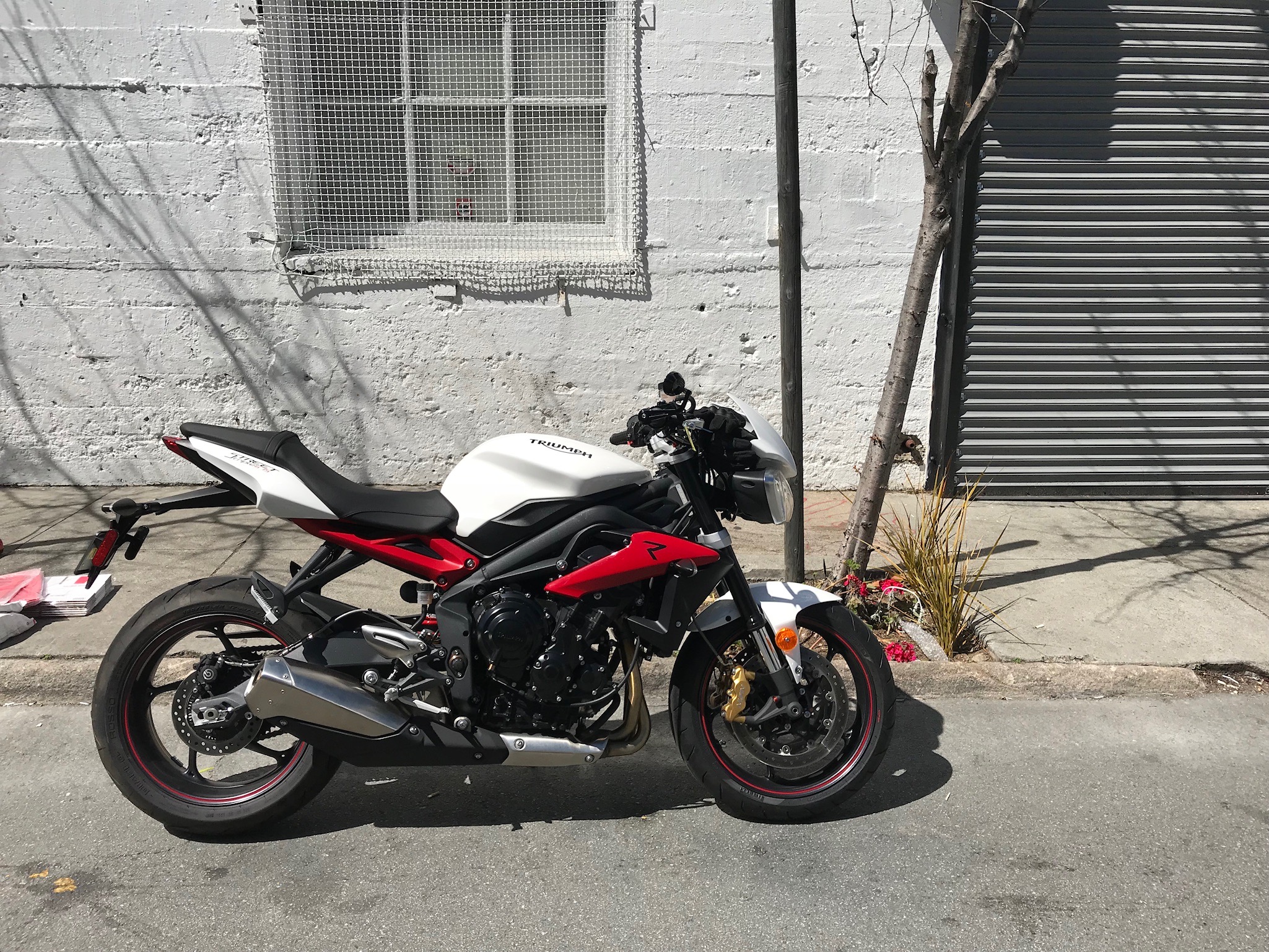 On the day I bought it I drove up and over Twin Peaks, down towards the ocean. And as the sun dipped beyond the horizon the bike changed. All the lights tuned themselves correctly, the dashboard color theme faded away and I felt that this bike wasn’t really even a bike any more. Not like the first clunky, old machine that I had learned to drive on anyway. This thing was like a horse. It had a personality. I figured out that there are things it likes and things it doesn’t. But during that drive the bike had noticed the environment change and it tweaked its behavior in response.

And yes fine, I will admit it, I got the damn thing because of the break-up. There’s no avoiding that. And of course yes this is quite possibly a mid-life crisis and I’m trying my best not to think about the size of the crisis right now. But! Changing the subject and moving on: the thing that I love about motorcyles is that they do provide a confidence boost. And not really in the same way as buying nice clothes or travelling to an exotic locale makes you confident. It’s this feeling that there are a whole bunch of new problems you’ll have to face in the future. Low tire pressure, broken glass on the highway, intense rain and blistering cold, heatwaves in 100 degree traffic jams, pedestrians that walk out into the middle of the road, and steep cambers on winding mountain passes. Death lies at every turn.

Why does this make me confident then? Surely I ought to be a withering bag of nerves and anxiety.

Well, motorcycles are nothing but problems. But they get you to face them. They scare you. You have to meet the outside world in a way that you simply don’t have to with a car. And every tiny thing can kill you, every problem can build up into an even scarier problem.

But I feel like these problems make me a better person somehow.