You can see the climate crisis everywhere, in everything.

On the drive down you can see it in the signs that are posted in the dirt by farms on the edge of the freeway: “BUILD DAMS!” they scream. “WE NEED WATER, NOW” another sign begs in giant sans-serif letters next to it. You can see the climate crisis in the crops that stretch to the horizon that ought to be green but are a Mad Max gold instead. You can even feel the climate crisis in the air itself when pulses of heat ripple through the land, just a few degrees short of becoming unbearable, unlivable.

It’s clear that the climate crisis isn’t going to be some distant trouble of Nairobi or Singapore and you don’t need a degree in climate science to see that California is a paradise in the midst of a catastrophe.

All the signs are here. 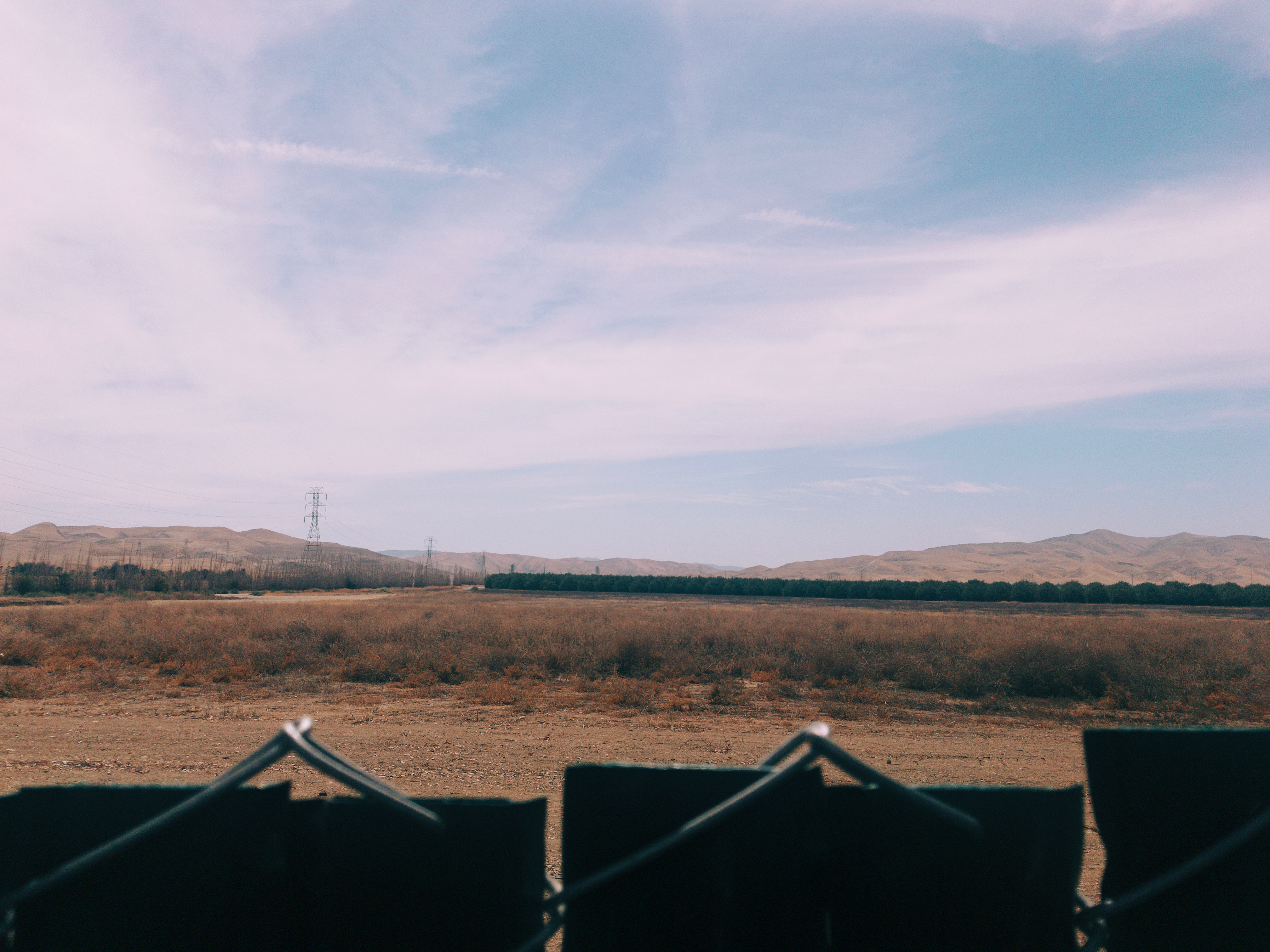 Los Angeles starts with a bang; after a five hour drive on a dead-straight road and caught under the gaze of a mean star you’re welcomed into the city by a national park and roads that swoop, duck, and peak around the hillsides as if they want you to play with them in the shadows. And play you do. Your motorcycle perks up – this is the type of road that he’s been waiting for.

Winding highways lead you through Beverly Hills at dusk. Playboys are driving around in Bugattis and Ferraris but you’re much faster, you’re nimble and efficient, and you dart between them with ease. Your motorcycle is a high precision tool, one that dances between their flash cars that are stuck in traffic despite how expensive they are. It appears as if LA traffic doesn’t care when their next album is dropping and doesn’t care how much money they make. The traffic will gobble them all up either way.

With a light touch on the throttle you blitz past and leave them in your dust. 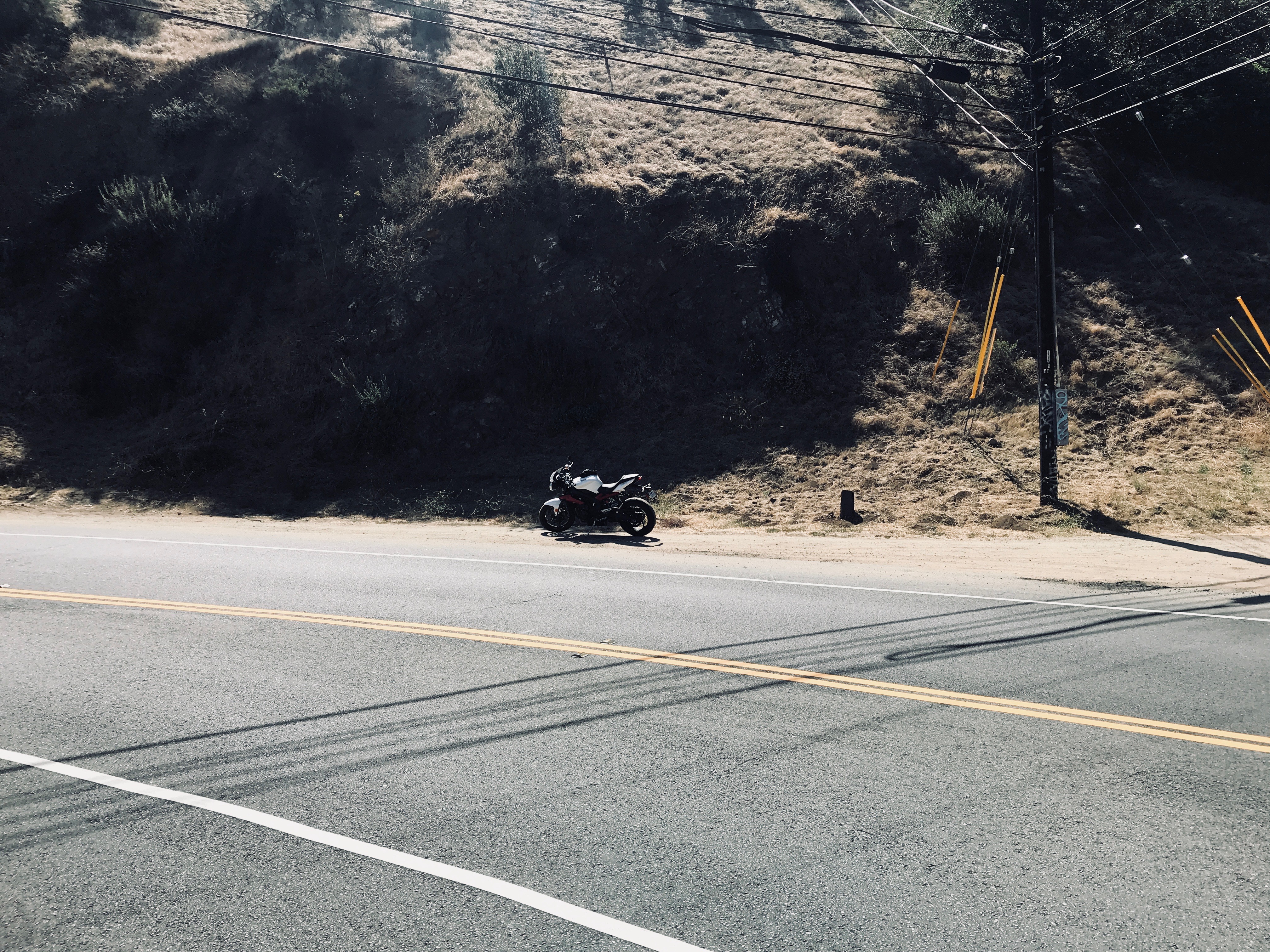 The next day is your birthday. You wake up and head towards the hills and up and around Mulholland Drive. You see the urban sprawl for the first time in all its sheer horror/wonder. You gasp at this city that people have built in such a short amount of time. But LA is not really a city, you realize, it’s a megacity – a metropolis built around the automobile.

The whole time you’ve been in LA you’ve been wondering where all the movie money goes, now you turn a corner and you find that it’s just been plowed back into the hillsides. Hundreds, thousands of mansions and gorgeous homes dot the cliffs and valleys of the surrounding neighborhoods.

Something like this in England would be torn down in a heartbeat but, out here, flaunting wealth in this way is somehow inspirational to people. We would likely see it as capitalism on steroids. Mass hysteria. People just shouldn’t have this much money. It’s broken, the whole damn thing is broken, you think as you boom around the hillsides. 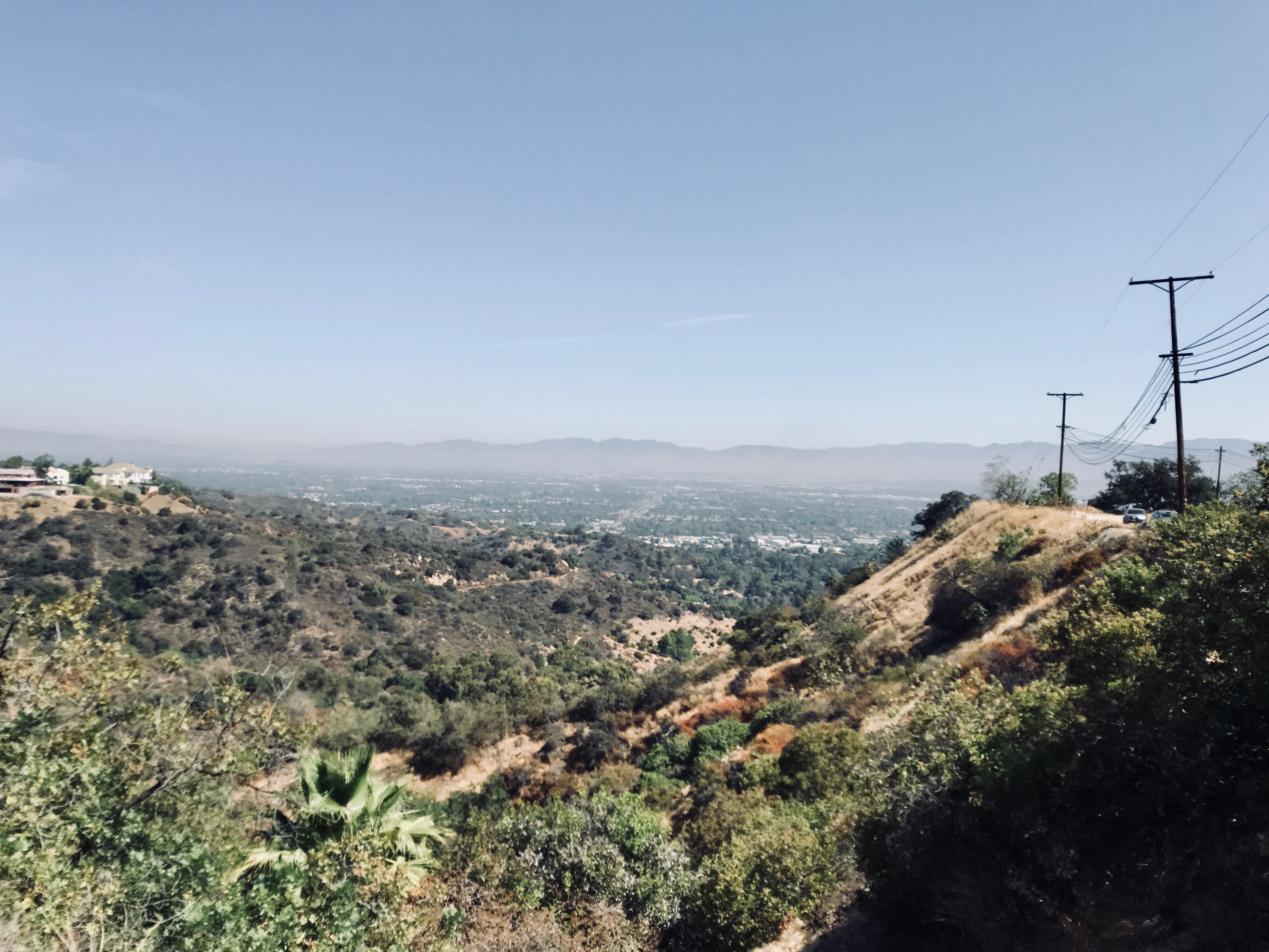 After driving around the city all day you notice something else: this place wasn’t designed for human people. Not just because of the highways and cars, but also the heat and the architecture. There’s just no shade to be found anywhere, as everyone hides inside their cars and homes where air conditioning can easily be found.

Public spaces should always have plenty of shade in a city that sits on the edge of the sun like LA though. At the Griffith Observatory a man drops like a stone in line because of the heat and the whole world goes mad for a minute as an ambulance and a fire truck rush to the rescue. 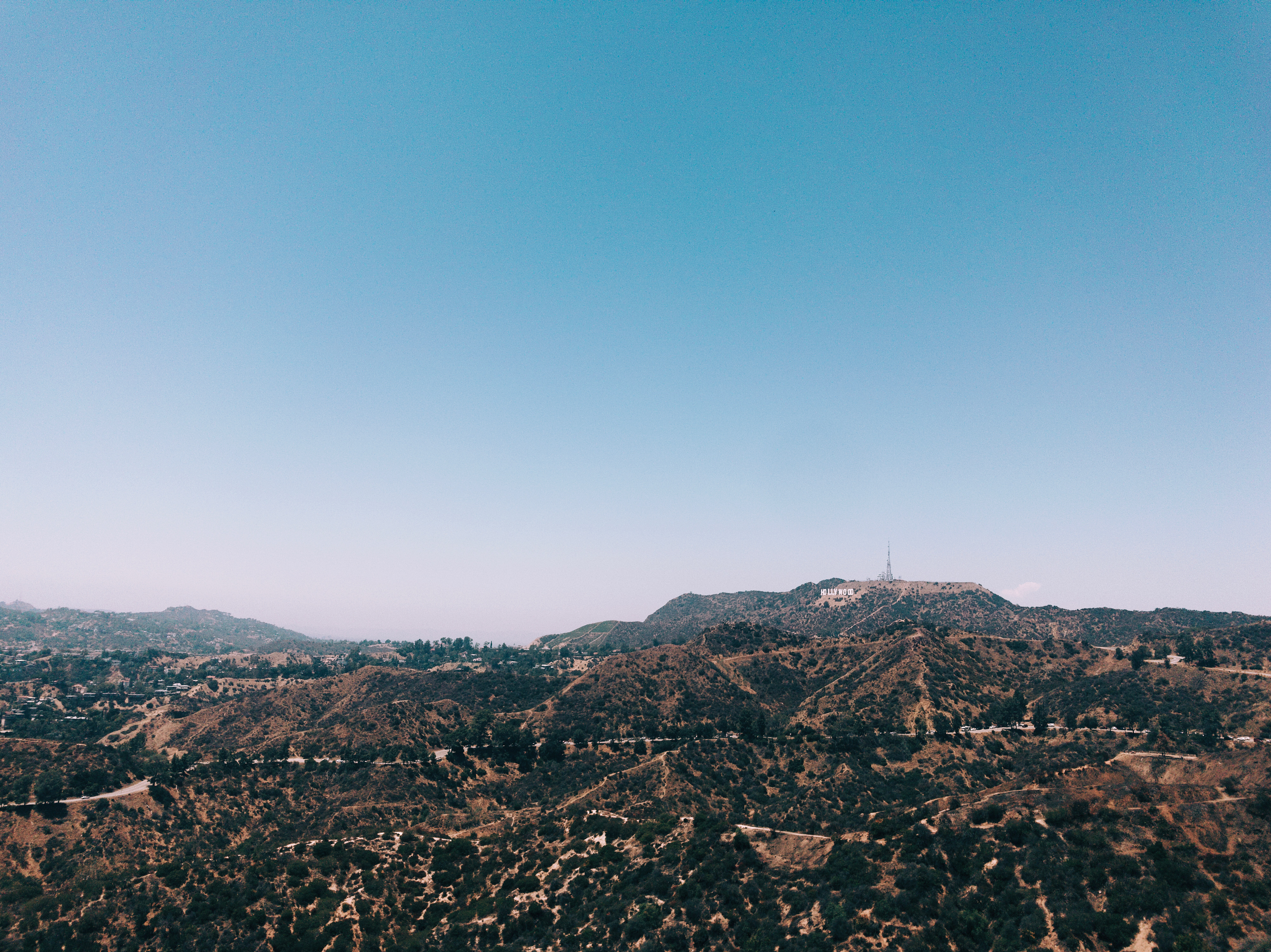 It’s impossible to get anywhere without a car in LA but it’s also impossible to park. Thankfully your bike can fit on the pavement, behind a bush, on the very tip of the road and tuck up and out of the way for everyone else. Parking is always free, too.

From the Observatory you can see the haze of pollution that hovers over the city at all times of the day, producing beautiful sunsets of orange and the brightest of pinks at night. The climate crisis is something I can’t stop thinking about because here it’s unavoidable. You can’t hide from it, as even in the family-friendly tourist spots, apocalypse looms. 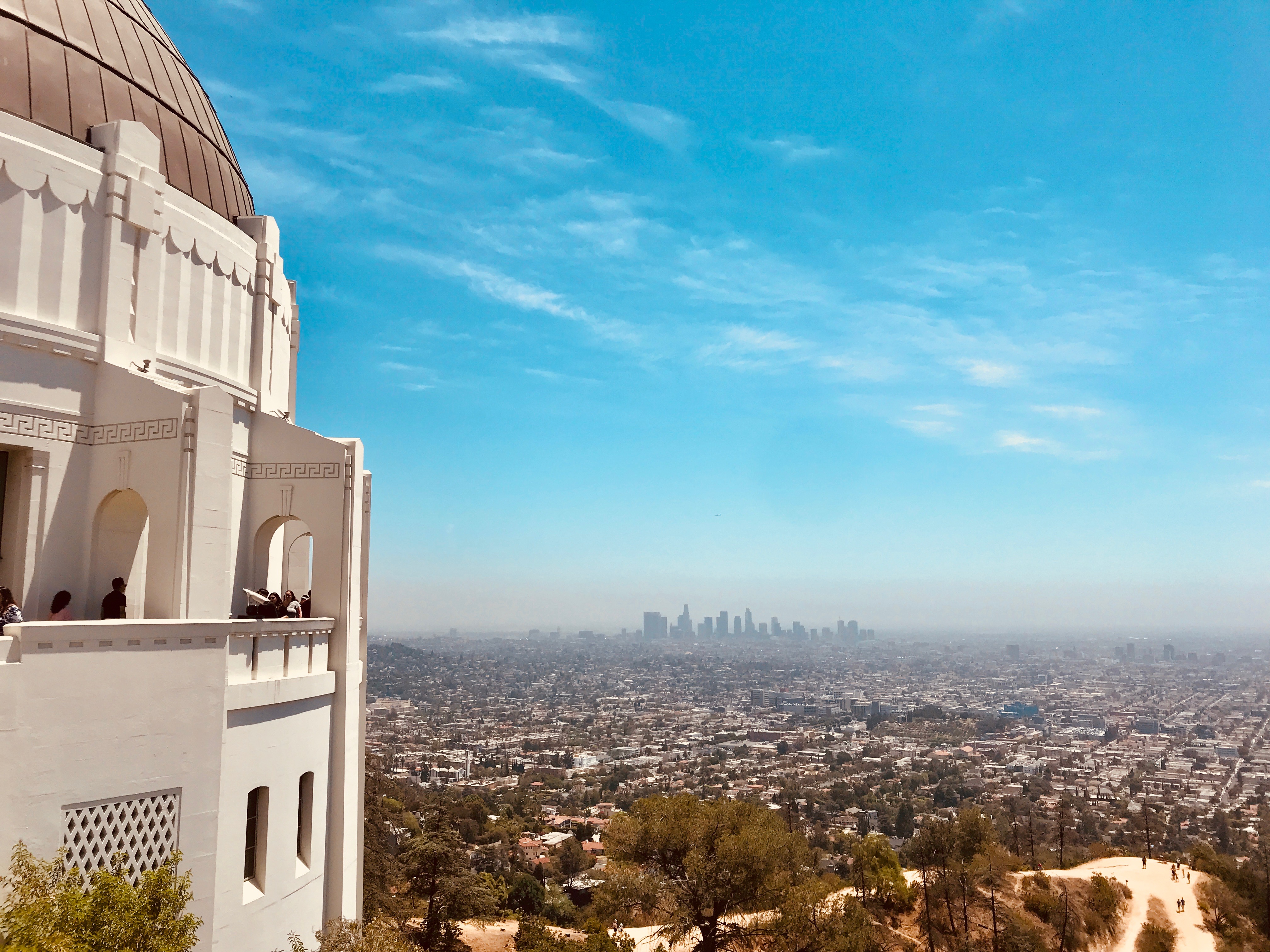 The next day you’re on the bike again. You’re bored of the heat and since a kid you’ve wanted to drive on the Pacific Coast Highway. Well, now’s your chance.

On the way out of the city you drive into another fancy area with McMansions everywhere. At an intersection you get caught in the traffic for a moment and suddenly you find yourself locking eyes with the actress that plays Maeby Fünke in Arrested Development, Alia Shawkat. It’s a weird moment where Hollywood is no longer teeming with movie stars but with people going about doing their jobs. All the magic of the place vanishes with that quick glance.

Tom Cruise and Harrison Ford, Emma Stone and Kanye are quite likely stuck on the same road, sat right behind you, fuming at the traffic that materialized out of nowhere. And they’re late for work. 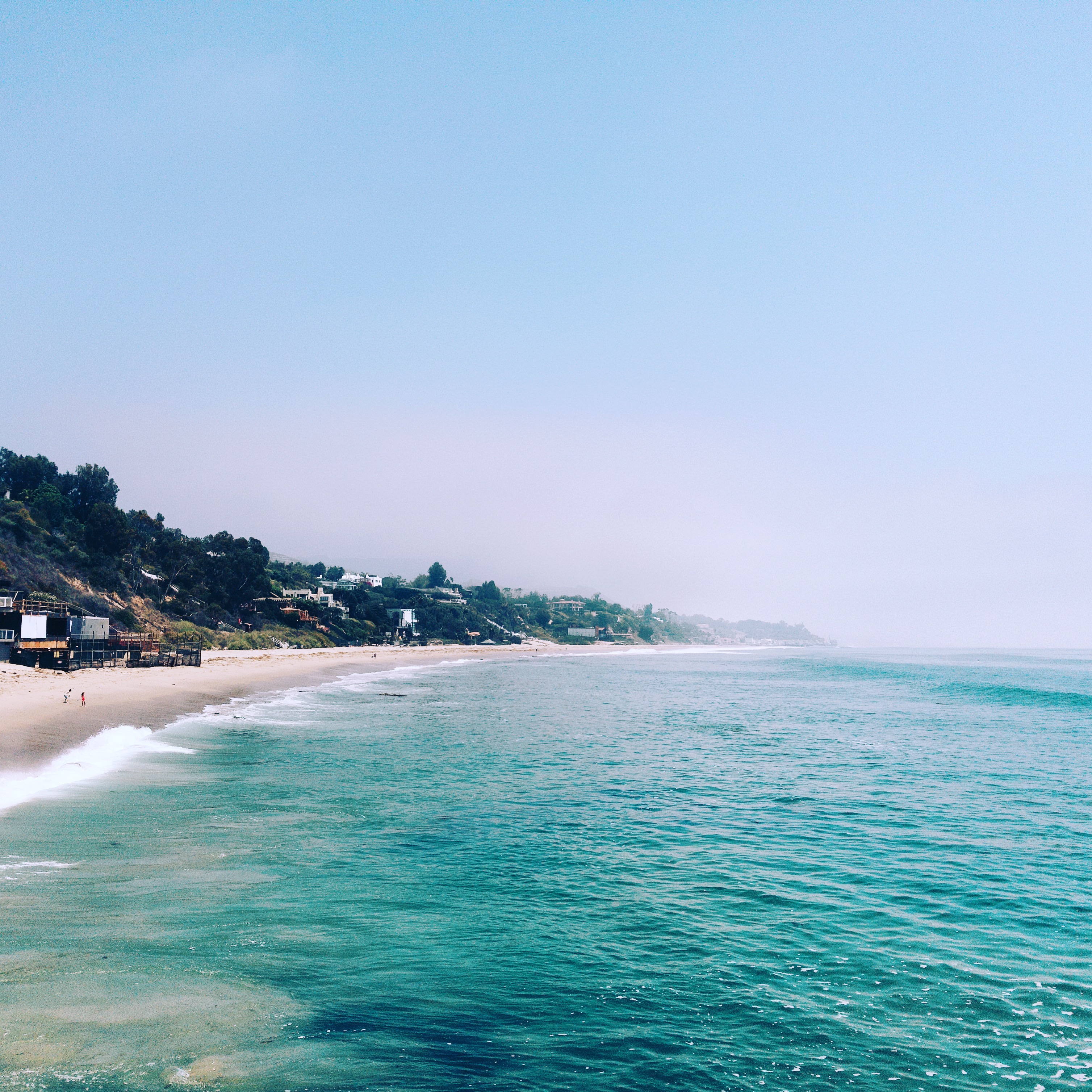 Next stop: Malibu. The repressive heat fades into the background as the sea air picks up. You know that you’ll always live by the sea and there’s no use fighting it.

You’re going to drive the whole thing. Fourteen hours, all the way back up to San Francisco. Through aches and pains you smile and push on to the next city; Santa Barbara, then Santa Maria. The miles, just like the beaches and golf clubs, the mountains and canyons, fly right past you. 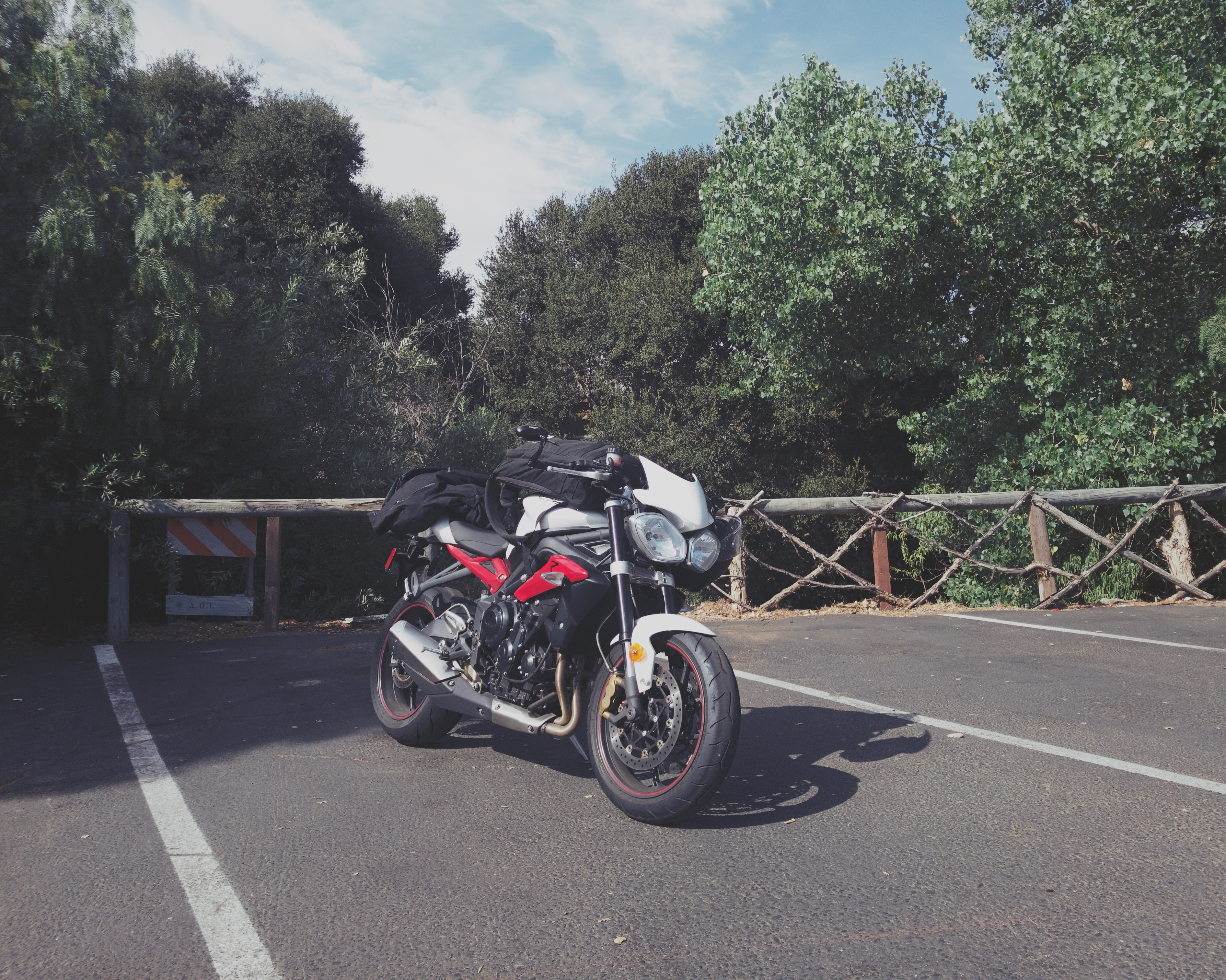 Each mile on a motorcycle is a new adventure and a new problem though. A cardboard box is swept off a truck and comes barreling towards you on the freeway. You have to swerve to avoid it. Usually that wouldn’t be all that scary in a car but on a motorcycle everything is, well, designed to kill you.

You remember one story of how a family friend got wiped out on a highway because a plastic bag got stuck in their front tire of their bike. Your eyes are constantly alert along the hillsides and tree tops, along the city streets for all existential dangers that might be hiding there, plastic bags included. 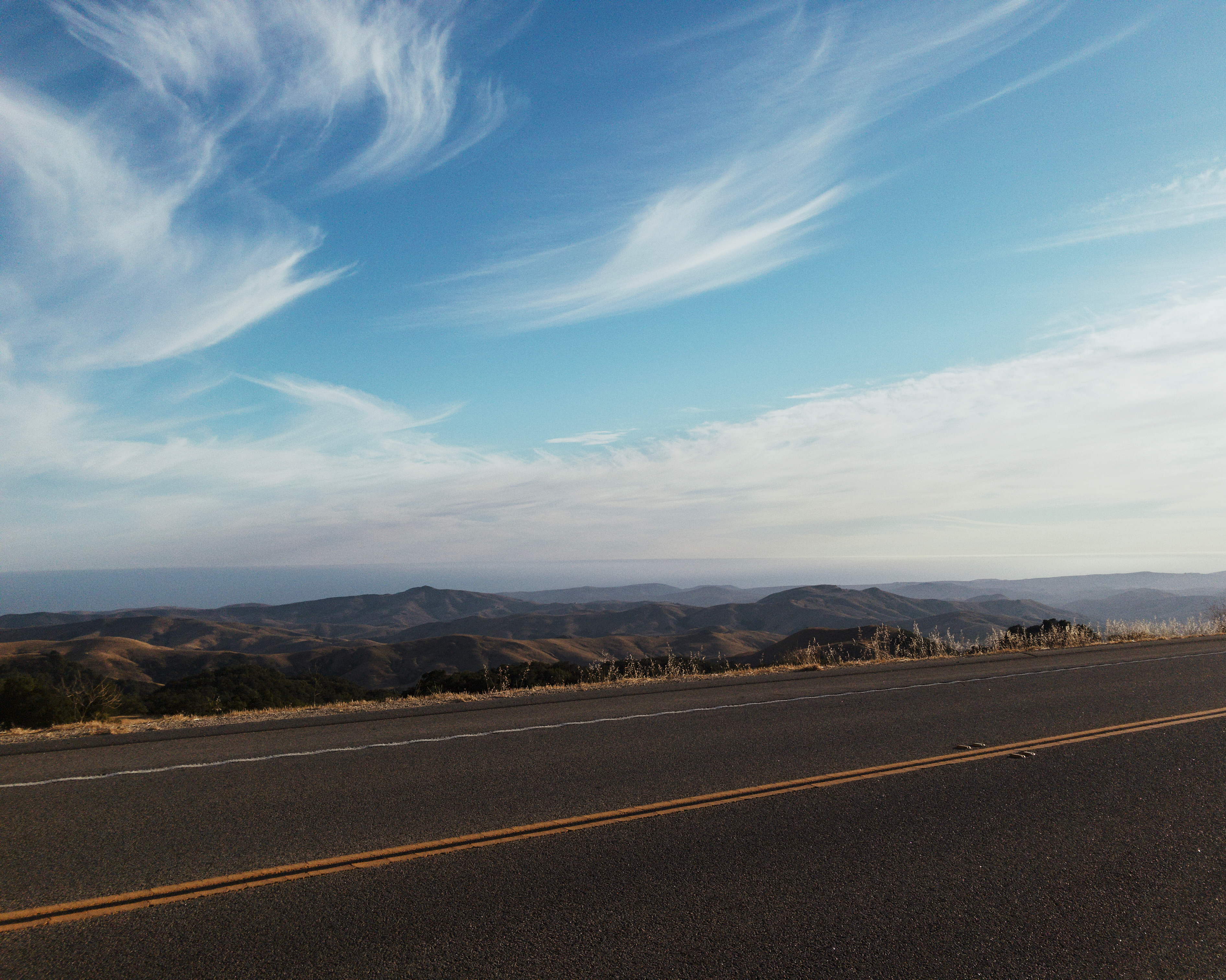 After seven hours of driving you break off from the mountains and onto the coast once again. You’re going to drive the long way up. You stop to take a break at the top of a mountain and look across the quiet landscape. It’s beautifully, wondrously quiet.

The clouds are tumbling about in the sea of blue above you and are constantly shape-shifting in an effort to impress and cajole you into looking at them. 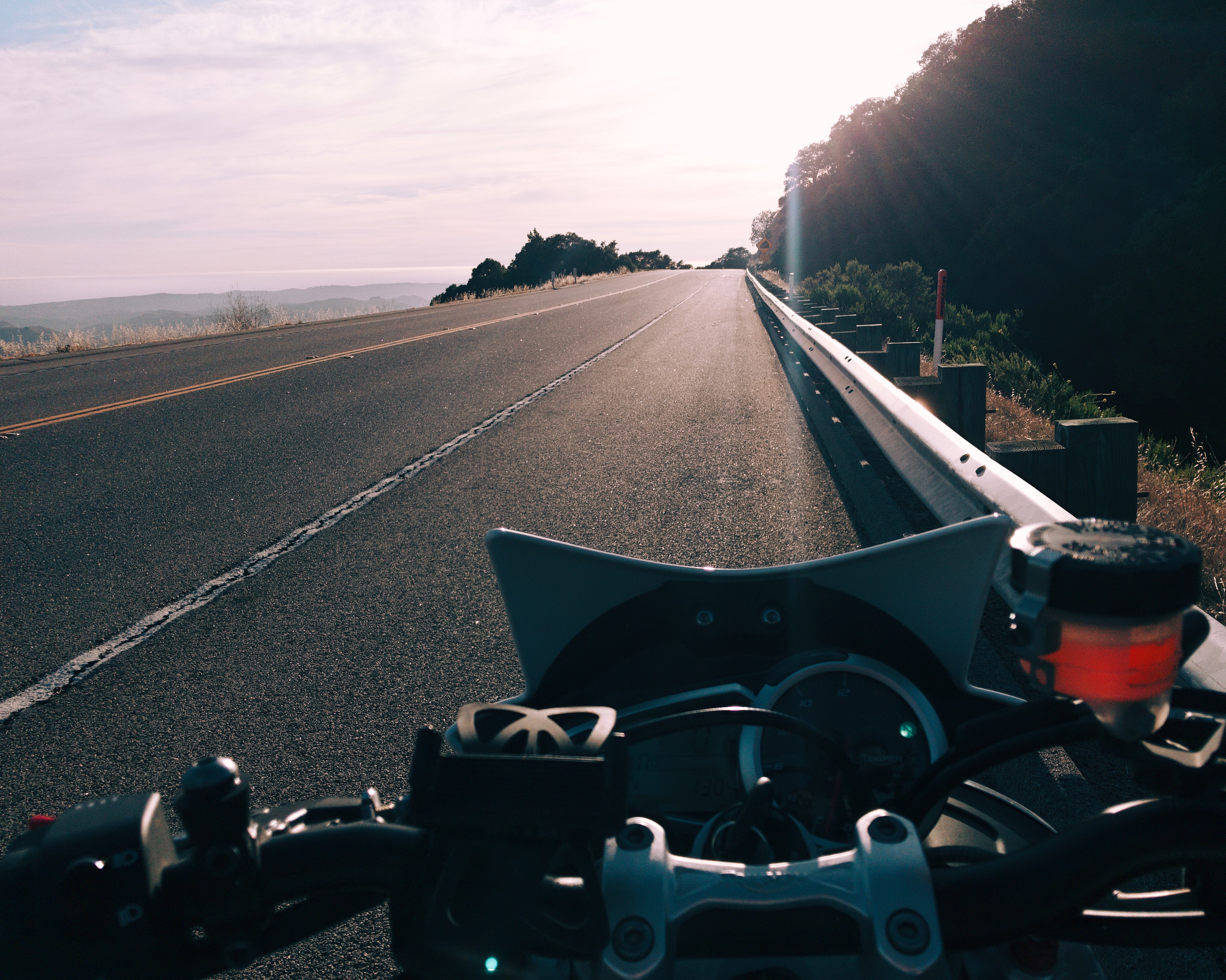 The sun is starting to set now. But your bike is ready again. In certain moments your motorcycle is like a horse with a personality and suddenly becomes impatient, wants to get going and move things along. You can feel his anticipation and excitement for what we’re about to do next along these cliffs.

Either that or the California desert sun has finally pushed you over the edge. 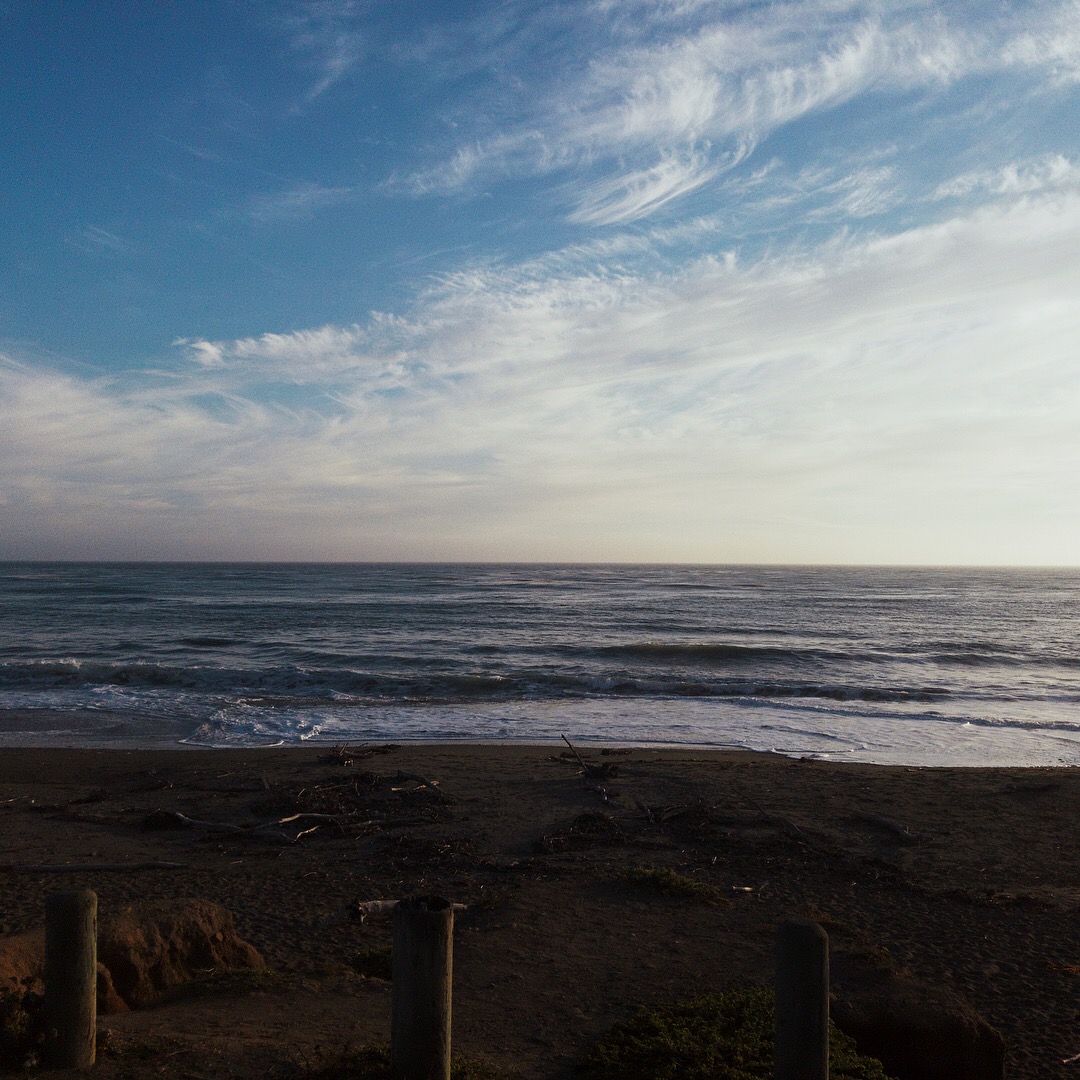 You knew that the Pacific Coast Highway, the winding paths that skirt the tip of the ocean and the land, would be a beautiful drive but it’s difficult to put into words just how breathtaking it is once you get there. Despite your attempts, pictures simply won’t do it justice.

As the sun sets quickly you begin to run out of fuel and you’re nervous but you’re not panicking. Once everything is pitch black, shadows break through the fog and every moment after that is like Alan Wake or Limbo – a dream of shadows and lights that whisk all up and around you. You can’t see the ocean anymore but the stars are waving up above. 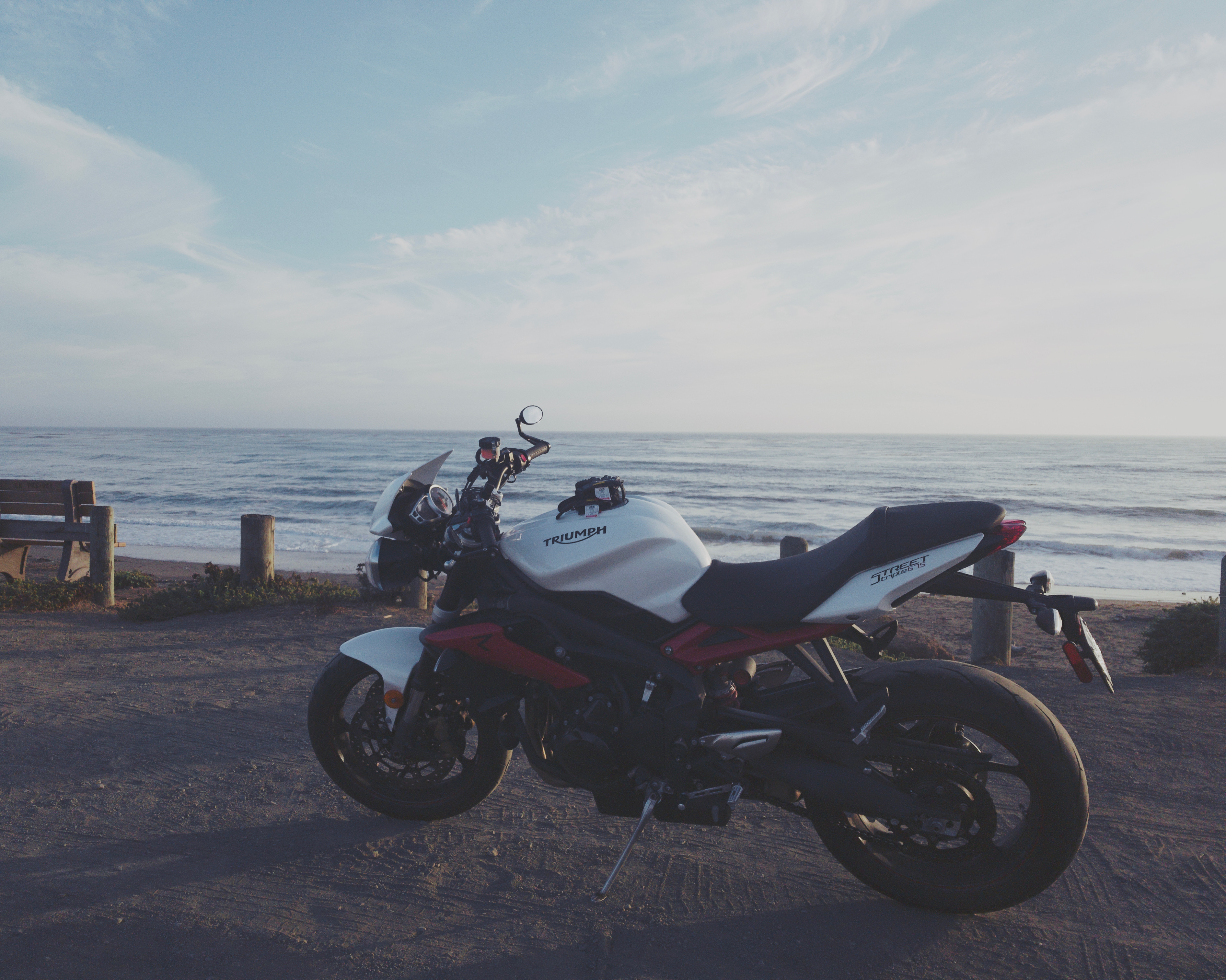 It’s now 1am. You’re listening to a podcast in the dark, accelerating at top speed around seaside cliffs, and you can’t stop smiling.